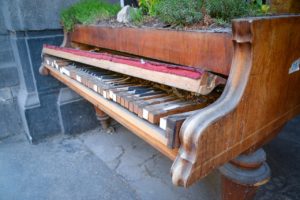 Let’s value our composers before it’s too late!

This is a bit of a rant, in respect of certain big businesses that are damaging the independent music industry in my opinion. Not only that, many music producers are going along with this by allowing their music to be licensed for pennies/cents.

Some big music licensing websites are offering low-cost subscriptions for around $15 per month (about £12) and download as many tracks of music as you like.

While I can understand this for things like Spotify, where you are just listening to the music, I don’t see how this is a good model for music licensing. Essentially, a composer can have their work used in company videos, income generating products, promotions, products and adverts for literally pennies.

Almost giving the music away is great for the large companies doing this as it creates a monopoly and makes them richer, but what about the composers? Users of this service who like the low-cost, need to understand that composers may be struggling to earn any kind of income.

Don’t confuse this with mainstream music, where the current flavour of the month will be heard everywhere and downloaded/streamed millions of times. This is a different revenue model.

We are talking about stock music composers who work really hard to write and produce original music. If you are really fast at composing and not writing complex music, you can may be able to create one piece of music per day. Personally, it takes me a few days from idea to completion. Not only that, you will have had a lot of development as a musician or music producer to get to his point. And, don’t forget about the thousands that you will have spent on equipment and instruments over the years.

So… What is the real cost of an original music track? And… How much is it worth? Given that music can be licensed over and over, it is a difficult one to answer. However, maybe a few tracks will sell frequently, some will sell once or twice per year and some not at all. Historically, stock music rates can be anything from £25 per license. This is often 50% to the composer as the library selling it takes a commission.

As a composer, you need to have a passion for creating music and you just have to keep adding and growing your catalog. The more you have the more you sell. Eventually, you will get to a stage where you have a full-time income, but you have to keep creating. You can’t stop, otherwise, you will get left behind. This is how it has been since I have been involved in the business (I started around 2000). This was considered the lower end of the licensing industry back then, however, what is going to happen if the composers start getting paid pennies for each license?

Surely, no composer can justify earning pennies for such a lot of work? This is a talent and an art form, it should retain value. As a music library owner and a composer, I can not see these models being good for anyone in the long run. I know numerous composers who have given up due to the difficulty in building an income. One found that he could earn a better income selling sandwiches. Sad but true.

I for one have no plans of giving up music publishing or composing, but I am certainly not offering subscription models that allow people to download unlimited music and I won’t be working with any libraries that do. I don’t have an issue with subscriptions that allow a set number of downloads to ensure a fair payout to composers. My issue is with subscriptions that let you download as many tracks as you like for next to no money. I would not do it with my music and will not do it with other composers either.

Yeah, I know some composers are doing well out of these websites, but it is a numbers game, eventually, I can see the pressure of having to keep churning out large numbers of music tracks turning these libraries into vast repositories of formulaic, homogenised, similar sounding music.

On the upside, if independent libraries, run by composers, not greedy executives, stick to selling quality music that can’t be bought on these low-end subscription websites, maybe our customers will respect us, value our talented producers and continue to support us and our composers.

It’s kind of like what has happened to the high-street in the UK. Big businesses squeeze the margins and make all the independent shops suffer or close. Eventually, there is a crisis and people realise they are going to lose their local independent suppliers if they don’t support them. The supermarkets killed off the milk round industry in the UK. Doors step milk delivery is a tiny business now compared to what it was.

Music production and composing has to be a sustainable industry for it to exist, if not I fear that more talent will be wasted and we may all end up selling sandwiches.