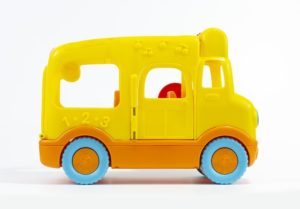 A lot of nursery rhymes are considered to be in the public domain, however, The Wheels on the Bus is not so clear.

It is derived from Here We Go Round the Mulberry Bush and Buffalo Gals, both written in 1800s.

The composers identity is unknown, however, using the copyright rule of thumb of  70 years after the composers death this music is considered to be in the public domain.

If you create an arrangement and recording of a public domain music piece you retain the copyrights for that version as the musical arranger and you will also own the copyright in the new audio recording.

The lyrics are a grey area as nobody can confirm or deny the origins and we can not be sure who the original author is. As such it is largely considered public domain by music publishers simply because there is no confirmed author and it is widely used around the world and has been published many times.