A big part of voice over work is the editing after the recording. The voice over or audio producer will remove each and every breath from the raw audio file. This is time consuming and can only be done manually (if it is to be done properly).

When it comes to large narrations, such as audiobooks, the amount of editing required is huge and removing the breaths alone can take 2-3 hours per produced hour of narration.

Most voice overs will not release a ‘breathy’ recording as many end users will just use it as it is breaths and all. However, the big problem is that once audio is produced with compression and EQ the breaths actually become louder and more prominent. For this reason, de-breathing is an essential part of producing a high quality voice product.

Some may argue that removing the breaths makes audio sound unnatural; after all, we all have to breathe when we speak. TV reporters for example are never de-breathed during a piece to camera. On the other hand, adverts and pre-recorded narrations are de-breathed. 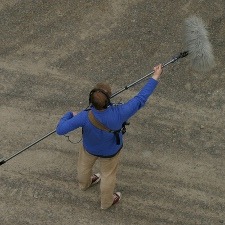 Here is the reason. When presenters record a piece to camera their audio is being recorded in a very different way. They are ‘boomed’, which is basically the practice of pointing a microphone at them from above, usually 3 feet or so.

The fury part of the boom that you see here is a windjammer, also known as a dead cat but not a name any cat lover would use. Be assured, the windjammer is entirely synthetic 🙂

The mic inside the windjammer is a shotgun microphone which is highly effective at focussing on a narrow area in front of the narrator. While breaths are still present, the microphone placement means that they are less noticeable. Also, the shotgun mic is a hypercardioid or supercardioid, which means it will exclude background noise because it is very directional and picks up only what is in the path of its narrow focus.

On the contrary, voice overs in their studios tend to use sensitive studio microphones, such as the Rode NT2-A

They position themselves a few inches in front of the microphone (known as close mic’d), which produces a more intimate, richer sound. Due to the close proximity, breaths are generally more pronounced and more noticeable to the listener.

For this reason, as a rule of thumb close mic’d recordings need to be de-breathed, whereas narrations recorded with a boom do not need to be.

Obviously, each method has a different tonal quality and the method used should be determined based on the type of narration you require.

We breathe when we talk, so shouldn’t breaths be kept in the recording?

When people say this to me I say… You do not speak as close to someone’s ear as you do when you speak into a microphone. If you did, breaths would be a whole different experience. Close speaking increases the prominence of breaths. So, if you are doing a closed mic’d recording, it’s my my view that breaths need to be removed.

Are you involved in recording voice overs, or are you a voice over? Do you have an opinion or experience? Please share it in the comments.

I am Lee Pritchard, the co-founder of Media Music Now and other online businesses. I have a life long passion for music; composing it, playing it, producing it and being around others who are involved in it. If you have enjoyed my post, please take a look at our services on MediaMusicNow.

To learn more about me, see my personal website.

Sharing and commenting really helps and is very much appreciated.